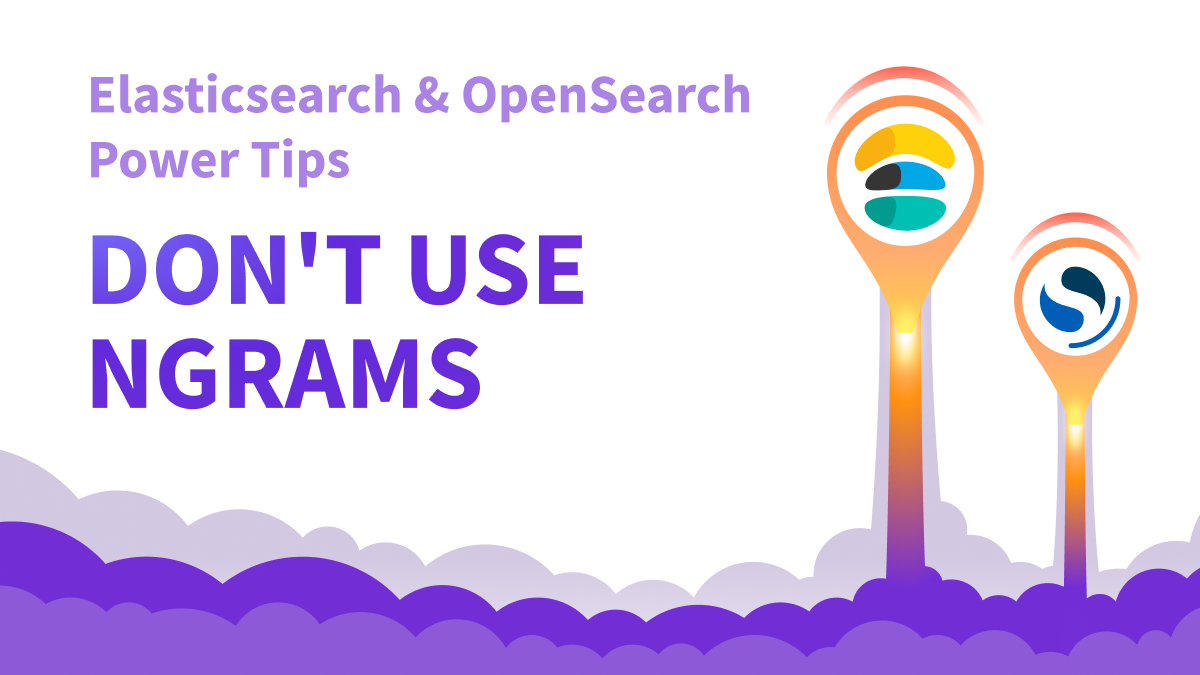 Don't use n-gram in Elasticsearch and OpenSearch

The costs associated with Elasticsearch's n-gram tokenizer are not documented enough, and it's being widely used with severe consequences to cluster cost and performance. In this post we will go through the use-cases where it's useful, and suggest alternative, more efficient approaches.

Elasticsearch and OpenSearch are the de-facto standard engines for text search, and both are often used as search engines over text documents corpus - for internal usage or serving external users.

For some use cases more specialized analyzers are used which do things a little differently, not necessarily emitting words in a human language, but some other output that is useful in other ways.

One of those specialized components in Elasticsearch is the n-gram tokenizer. It allows you to tokenize the text differently and by that enables some different and additional use-cases. Let’s explore what it does, how it can be used, and what common misuse we often see.

The n-gram tokenizer creates "chunks" of characters, emitting tokens that are not necessarily words like the standard analyzer, but are consecutive characters from those words instead. For the string "Quick Fox" the output would be (using a configuration of min length 1 and max length 2 for grams):

You can see, rather than just emitting the two words [ quick, fox ] like the standard analyzer would, the n-gram tokenizer emits “grams” of characters from the words, and those are the tokens that end up in the index.

In this instance, you would go from two tokens using the standard analyzer to 17 using the n-gram tokenizer. Over 8x the number of tokens were emitted, and this is with a minimal configuration for the min and max grams and only a two word (or 9 character) search string! You can just imagine how the number of tokens can explode with larger search strings and/or a larger gap between min and max grams (more on this later). You can read more about the ngram tokenizer here.

Another variant is the Edge n-gram tokenizer which emits less tokens thus is suitable for fewer of the use-cases detailed below, but is still rather expensive to use.

N-gram Use Cases in Search

There is a lot of advice on the net about cases where you supposedly should use n-grams, and the advice is usually surrounding very specific use cases.

The hidden costs of using n-grams

The root issue with ngrams, is the explosion of work they bring with them. Like we saw, a simple 2 word phrase is indexed as 18 tokens in the most simple case. This means much more CPU is required for indexing or search, whenever ngrams are generated from the text; and also a whole lot of storage. Indexes with ngram fields are significantly larger than what they could have been.

N-gram search also pretty much destroys relevance ranking - tf/idf and BM25 ranking is in effect but pretty much useless for all intents and purposes.

Those costs become a lot worse when n-grams are misused or misconfigured:

Now that we’ve reviewed some of the common mistakes that are made when using the n-gram tokenizer and the costs associated with using it, let’s review some of the alternatives.

Alternatives to n-grams in Elasticsearch

To recommend some alternatives, let’s look back at the list of use cases for n-grams:

As with all technologies, some features in Elasticsearch and OpenSearch need to be better understood to avoid mis-use. Unfortunately, the costs associated with n-grams are not documented enough, and there are too many blog posts out there just suggesting this feature without worrying about the consequences. Our experts were able to cut cluster costs by half and sometimes more by simply avoiding ngrams. Feel free to reach out to consult us about your clusters, and let’s see how we can boost performance and reduce costs for your cluster too!